The Ice Core Research Expansion Will:

Our current freezers maintain the collection of ice cores recovered from glaciers around the world at –30ºF. These freezers have been in continuous operation since 1989 and are currently at capacity with approximately 4.5 miles of ice drilled over 64 expeditions. A feasibility study conducted by SHP Leading Design recommends renovation of the existing freezers as well as the phased addition of 4 freezers that will utilize more modern technologies and efficiencies. This will help OSU meet its sustainability goals while supporting world-class research.

Expansion includes new freezers, new workrooms, new mechanical equipment, shelving and renovation of some existing rooms. The expansion will hold 6,776 additional cores and feature a new educational space with displays and accommodations for groups touring the facility. This project has a $6 M budget.

70% of Earth’s population lives in and around the Tropics. Thus, it is important to understand both the past natural tropical climatic variability and the drivers of the current accelerating loss of glaciers on tropical mountain ranges. The ongoing loss of these glaciers has serious implications for water resources and the nearly 2 billion people who live in these regions.

Ohio State's Ice Core Facility is the only place in the world where ice from many of these vanishing glaciers still exists. Future generations of scientists will deploy new methods and technologies to answer questions about our future informed by this glacial archive. But, this will happen only if we have facilities with conditions to properly preserve the existing collection and additional space to house unique ice cores acquired from remote mountains before they disappear from nature permanently.

The Ice Core Paleoclimatology Research Group at Ohio State drilled the world's first deep tropical ice cores in 1983 on the summit of the Quelccaya ice cap in the southern Andes of Peru. Since then, many more ice cores have been obtained from glaciers such as Kilimanjaro (Tanzania); Sajama (Bolivia); Huascarán, Coropuna, and Hualcán (Peru); and five sites in the Third Pole (Tibetan Plateau) region. The research group has recently launched new research programs to study the evolution of bacteria and viruses which have been preserved in ice for millennia, allowing scientists to address how their evolution has proceeded over the last million years.

To meet the research team, view the facilities, or learn more about this campaign, please contact:

On February 14, 2018, Rachael Penton, from ABC 6, met with Dr. Lonnie Thompson and Dr. Ellen Mosley-Thompson at BPCRC to discuss the Ice Core Expansion Campaign and the importance of ice core preservation. 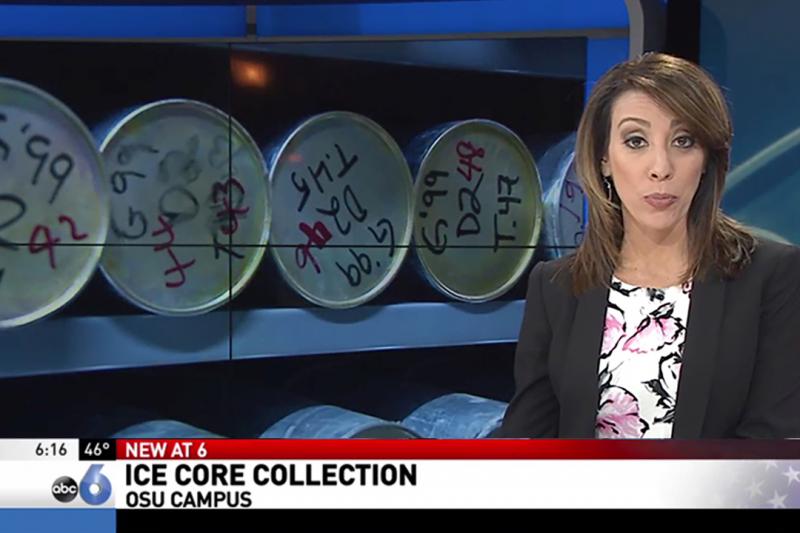 The full story is available at ABC 6: OSU scientists collect ice core samples from around the world to combat climate change.