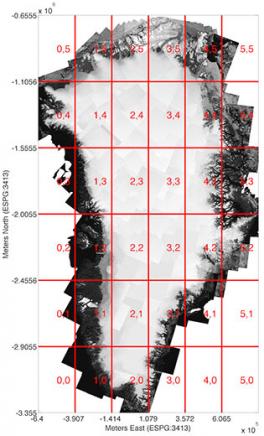 This Digital Elevation Model (DEM) is constructed from a combination of ASTER and SPOT-5 DEM's for the ice sheet periphery and margin (i.e. below the equilbrium line elevation) south of approximately 82.5°N, and AVHRR photoclinometry in the ice sheet interior and far north (Scambos and Haran, 2002). SPOT-5 DEM's were produced and distributed as part of the Spot5 stereoscopic survey of Polar Ice: Reference Images & Topographies (SPIRIT) project (Korona et al., 2009). Ocean surfaces were masked using the GIMP Land Classification mask and replased with the CNES CLS11 mean sea surface height (Schaeffer et al., 2012). All land elevation data is horizontally and vertically registered to average ICESat elevations for the 2003-2009 time period, and therefore the DEM has a nominal date of 2007 although care must be taken when using the DEM in areas of rapid change, such as major outlet glaciers south of 70°N. The DEM is posted to 30 m, although the "true" resolution of the DEM will vary from 40 m in areas of SPOT-5 coverage (see Korona et al. 2009) to 500 m in areas of photoclinometry. The ice-sheet wide root-mean-squared validation error, relative to ICESat, is +/-10 m, rangining from close to +/- 1 m over most ice surfaces to +/- 30 m in areas of high relief. The data are on the same grid as the icemask product (but at 30 m instead of 15 m posting), and are broken into the 36 tiles shown in the image to the left. Each tile is 16620x30000 and 250MB uncompressed. The data are in geotif format and in ESPG 3413 projection and are in height above the WGS84 ellipsoid. A 90 m version, given by bilinear downsampling of the 30 m product, is also provided as a single file.

[pdf] - Some links on this page are to Adobe .pdf files requiring the use of Adobe Reader. If you need these files in a more accessible format, please contact howat.4@osu.edu.